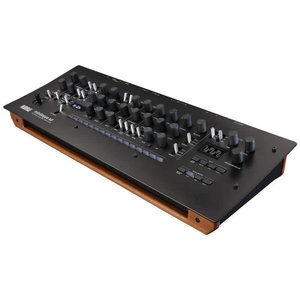 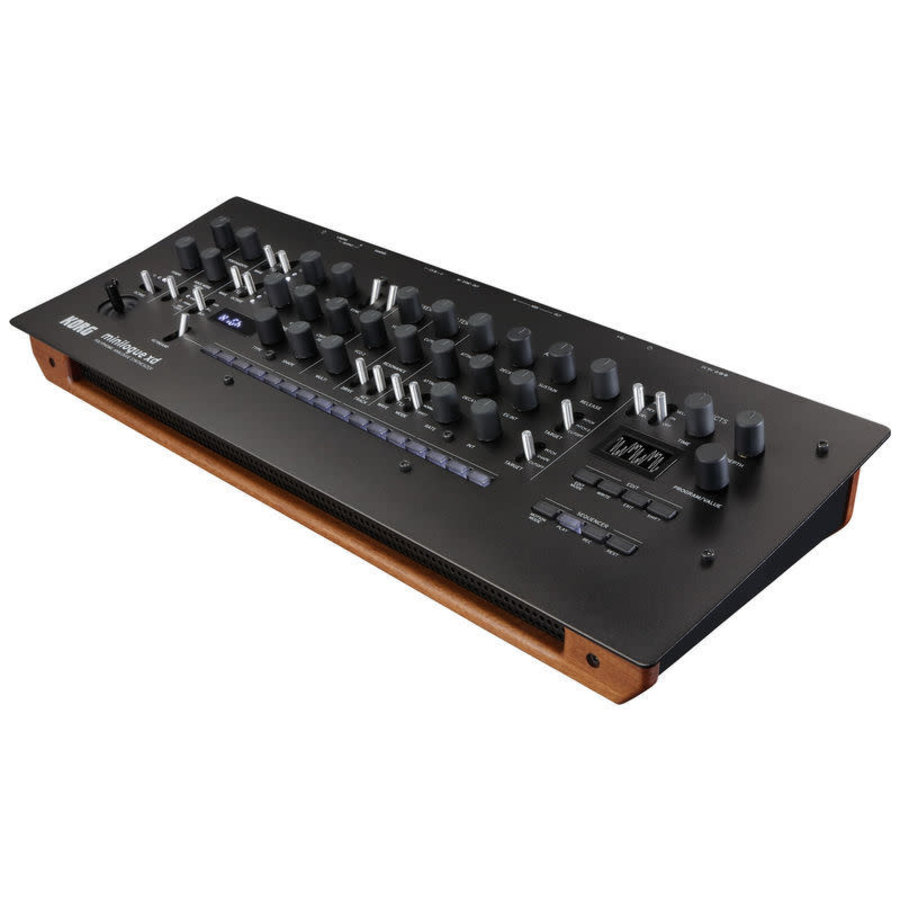 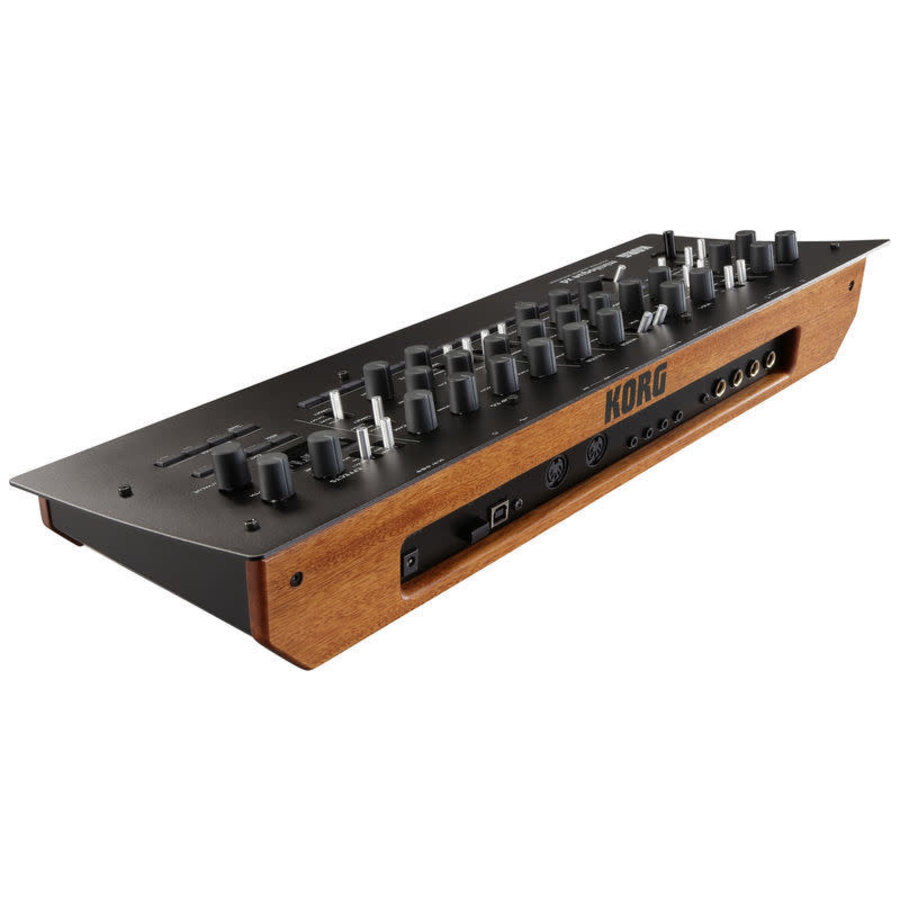 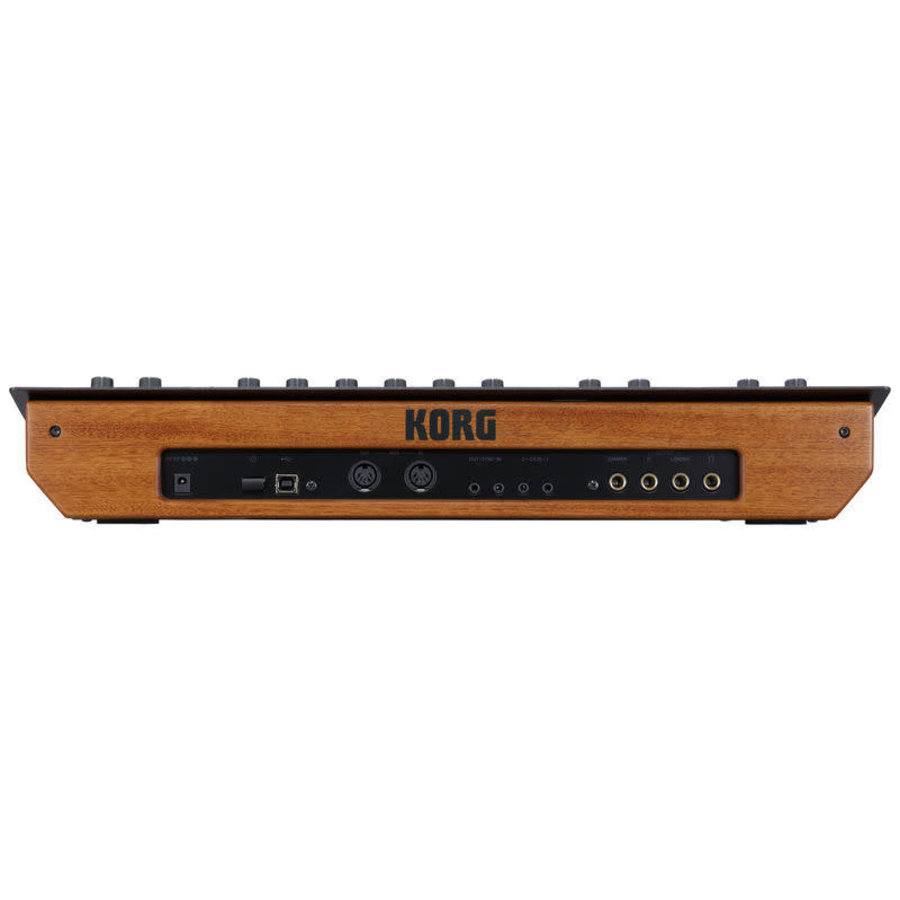 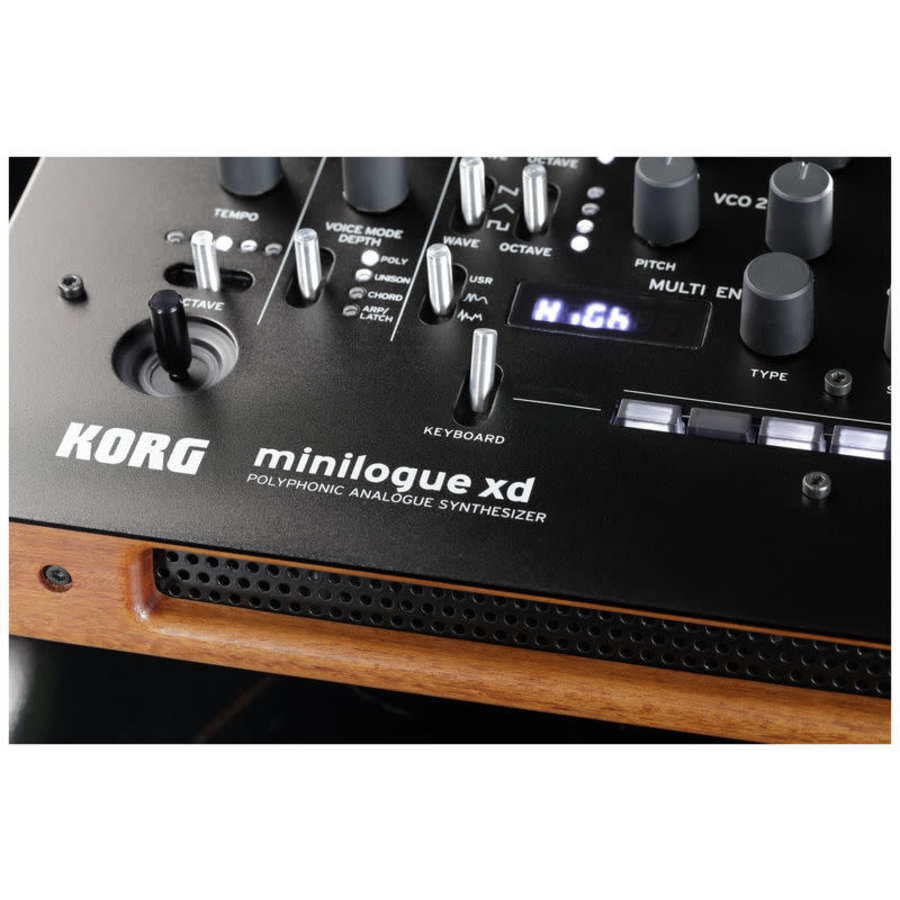 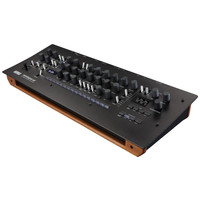 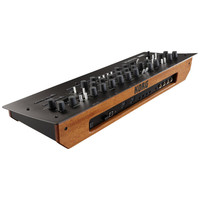 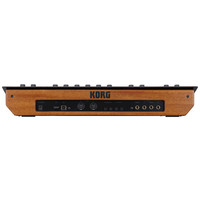 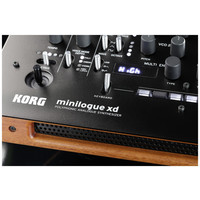 The desktop module is equipped with the same controllers as the keyboard version, making it a great choice not only as an additional sound module for your keyboard or DAW but also providing excellent performability, giving you an easy way to include an analog polyphonic synth in your setup. It's also equipped with a poly-chain function that lets you connect it with another minilogue xd or minilogue xd module so that the two units can operate as a polysynth with a total of up to eight voices in your studio or on stage.

Add the sounds of the minilogue xd to your setup or system!

Equipped with an analog synthesizer circuit and a digital multi-engine

Voice structure of minilogue xd is 2VCO + MULTI ENGINE, 1VCF, 2EG, 1VCA, and 1LFO. In addition to the distinctive circuits found in the series, such as wave shaping to shape the overtones of the oscillator and a sync/ring switch, there's also cross modulation, a two-pole filter that can be both sharp and fat, and a drive switch that adds thickness and drives signal into minilogue xd’s filter. Every parameter has been tuned in detail based on what musicians want out of their synth. The sounds range from the warm pads typical of analog to fat basses and crisp lead sounds, covering every situation.

The additional sound design possibilities of digital sound are delivered by the multi-engine: the third oscillator in addition to the two analog VCOs. This engine, which is equipped with three different types of sound generator (noise, VPM, and open-source user oscillators) lets you take advantage of a sonic character that's different than analog, and use it at the same time as the analog engine, infinitely expanding xd module’s potential through hybrid sound design.

minilogue xd’s high-quality digital effects use 32-bit floating point DSP processing, adding a finishing touch to its deep sound design platform. The three types (modulation effects, reverb, and delay) can be used simultaneously, letting you choose from a wide range of variations including chorus, ensemble, warm tape delay, and a diverse variety of reverb. The user effect slots allow you to load your own effect programs that you've created.

The minilogue xd features a customizable open-source environment. The unit comes with 16 user oscillator slots and 16 user effect slots that you can customize. Oscillators and user programs that you’ve created with the SDK (Software Development Kit) can be loaded into the minilogue xd via the dedicated librarian software, as well as oscillators other users share online.

What sounds can you create using the fusion of expanded digital oscillators with analog synthesis? Create original programs, share code, and participate in the user community. KORG even provides sample code to get you started.

One of the major features of the minilogue xd series is its 16-step step sequencer. Each of the factory-preset programs has an embedded sequence pattern created with performance in mind.

The step sequencer provides 16 steps, and supports both realtime recording and step recording. You can use the 16 step buttons to select a step directly, allowing quick editing to replace the pitch of a step or to mute it, or even improvisatory performances. Motion sequence lets you record the movements of up to four knobs, adding time-varying change to the sound, and you can record not only smooth changes in value but also values that change precisely at each step. You can use this to have different parameter values at each step; for example, you might create a drum pattern or sound effect from just a single program. This allows countless ideas to be unleashed.

When you turn Keyboard mode on, these 16 buttons operate as a keyboard of more than an octave, providing a convenient way to check the sound.

The minilogue xd module can be used in conjunction with another unit (*2) in the minilogue xd series (*1) for poly assignment settings. Specify one unit as the master and the other as the slave, and they will play as an eight-voice polyphonic synthesizer (*3). This supports a variety of uses, such as a voice-expansion module for the minilogue xd or as a sound module for a DAW-based production system.

*1: For keyboard-equipped models, supported in system ver. 1.10 or later.
*2: Any combination of the xd and xd module can be used.
*3: The two xd units can each play four voices, for a maximum total of eight voices. The master unit takes priority for producing notes, and the fifth and subsequent voices are assigned to the slave unit.

The minilogue xd module comes with a diverse variety of music software from Izotope including “Ozone Elements” which lets you not only create songs but also master them using AI, “Skoove” which will help you improve your keyboard playing skills, “Reason Lite” DAW software, as well as software synths from KORG and other brands.

In other words, the moment you get your hands on this synthesizer you'll have a variety of tools to help you take your music to the next level.

Other specifications are identical to the minilogue xd.
Add your review
0 stars based on 0 reviews
By using our website, you agree to the usage of cookies to help us make this website better. Hide this message More on cookies »